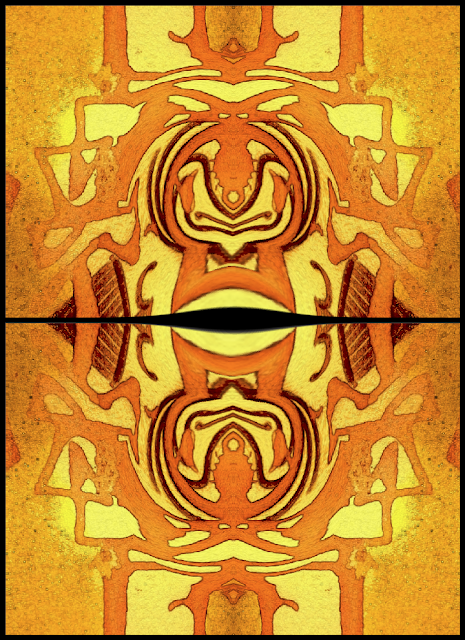 When I was a kid, I read a book about da Vinci that suggested he'd made a game of finding images hidden in random scatterings of stones and irregular scrapings of plaster; supposedly it'd sharpened his eye for art. I started looking at the world more closely after that.

Clouds and popcorn ceilings, I found, were flux with images; a dark, swirling chaos of cheap wood panelling could contain the most expected and random forms. Often, those forms were faces, peering up from aether across the gleaming razor of my imagination.

I kept it up. By now, my existence is infiltrated by images: the trash bag rushing past my car on the side of a dark highway becomes a white hart, its antlers pure silver. Just a flash of reflected light, gone in an instant, but half a mile down the road and I can still see him, the image eclipsing my mind's eye, the details sharpening.

Sometimes these small miracles happen with words. Halfway through the mind-flaying torture of my four years doing Data Entry, a moment revealed itself in the last names of patients listed down a page: LIONS, WADE, GENTLE, RIVERS.

For a moment, the endless stacks of miserable medical files and the dusty, toxic office around me vanished as I stood at the edge of a muddy river in the heat of the savannah, watching four great cats across the shallow, snaking water. Dust rose from their paws as they crouched to drink; it swirled around them like gilded vapor, lit by the golden reflection of their fur, fueled by summer sun.

The rest of that wretched day, be damned. Those few seconds still stretch out, eternal in the shuffling topography of my mind; and now that river's run downhill, slipping through some strange arroyo carved out of language, transmitting itself to you. Flush with an entire existence outside the prosaic reality of four names on a page listing the deceased patients of a state hospital.


Posted by Outlawed Arts and Letters at 2:48 AM

Outlawed Arts and Letters
Gainesville, Florida, United States
Bill Outlaw hails from the Gulf Coast of Northwest Florida, more specifically Panama City. He spent most of his childhood playing outside, refuting his religious instruction, and hiding in the bathroom reading weird books when he was supposed to be in church. In his early 20’s he escaped to Sarasota, where he attended the New College of Florida, gaining a degree in British and American Literature. He is a First Prize winner in Poetry from the Sarasota Reading Festival, and has published works in New Collage, Backwards & Ugly, the North Carolina Literary Review, as well as contributing poems to the anthology The World According to Goldfish, Volumes One and Two. He has exhibited visual artwork at galleries including Blake Street Studios in Raleigh, North Carolina and the Vision Room in Durham, North Carolina. He currently resides in Gainesville, Florida, and maintains an art blog titled Outlawed Arts and Letters.